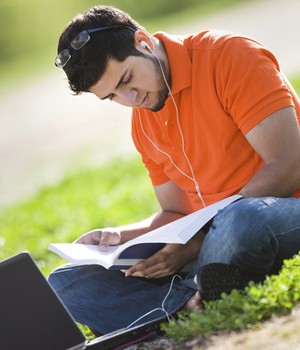 Most college students typically don’t have hearing loss on the brain – and especially not their own. But a recent study discovered that up to one-quarter of the subjects who thought they could hear normally showed early signs of hearing loss in college students. Medical professionals have questioned the role of MP3 players in this type of hearing trouble and found that males and non-white students are more likely to turn up the volume on their devices, which could put them at an even higher risk.

Researchers from the University of Florida in Gainesville initially caught the hearing concerns while seeking students for a hearing study. One-quarter of 56 students who said they heard well suffered from at least 15-decibel hearing loss at one or more frequency levels. That’s enough to disrupt classroom learning. Among the affected group, 7 percent showed losses of 25 decibels or more, which qualifies as mild hearing loss.

Students who listen to MP3 players can find themselves at greater risk of noise-induced hearing loss if the devices aren’t used properly, according to the American Speech-Language-Hearing Association. The group says that young students should be educated about potential damage early so they’re already protecting their ears by the time they begin college. In addition, some researchers have found that male students might gain the most from awareness campaigns, and further cultural factors might be linked to a recognition of possible hearing damage.

The risks of noise-induced hearing damage include the following:

College students should get annual hearing tests, or at least should seek be screened before they enter college and when they leave. Early detection is critical to minimize damage, so call our offices anytime for a test, treatment or practical, personal guidance. We are here to help.